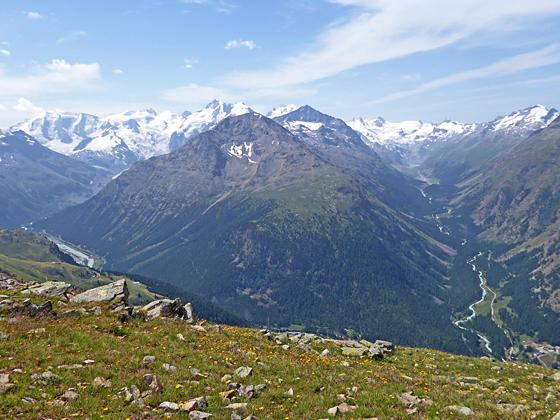 A short hike that is long on panoramic views of the high peak towering above the Roseg, Morteratsch and Upper Engadine valleys. Extend the hike with a high traverse beneath the ridge anchored by Piz Muragl and Piz Languard for great views of the Bernina massif.
See Trail Detail/Full Description

The impressive Bernina Valley stretches southeast from its confluence with the Upper Engadine Valley to the Italian border. Along the southwest side of the Bernina are two impressive side valleys; Roseg and Morteratsch, rimmed by magnificent glacier-clad peaks. A massive wall of summits, anchored by Piz Muragl and Piz Languard, towers above the northeast side of the valley.

The Muottas Muragl to Alp Languard hike starts above the northeast side of Val Bernina near its confluence with the Upper Engadine. From Punt Muragl ride the funicular to the top station at Muottas Muragl. Here splendid views encompass Piz Julier and Piz Ot towering above the Upper Engadine Valley to the west/northwest. The high peaks of the Bernina Alps soaring above the Roseg and Morteratsch valleys fill the skyline to the south while Piz Vadret and Piz Muragl rise above the Muragl valley to the east.

A brief ascent along the ridge leads to the Segantini Hut and more great views. From the hut the trail descends briefly before beginning a traverse beneath the rugged peaks and ridges lining the northeast side of the Bernina Valley. At 3.0 miles the path reaches the first of two junctions where a trail drops steeply to Alp Languard. The “short” version of the hike (4.0 miles) turns right at the first junction and descends to Alp Languard along the themed Climate Trail, which includes eighteen information panels explaining how climate change is impacting the alpine environment.

Alternatively, extend the hike by continuing straight ahead toward Piz Languard. The trail now curves around the west facing flanks of Muot da Barba Peider and then, after a short ascent, traverses beneath the ridge anchored by Piz Muragl and Piz Languard. This section of the trail travels through boulder fields and rocky meadows, climbs around a few obstacles and boasts spectacular views of the Roseg and Morteratsch valleys, the Bernina massif and nearby summits. At a junction below Piz Languard a second trail drops down the chairlift at Alp Languard for a 6.0 mile hike.

This trail should not present any problems for most hikers up to the Segantini Hut. Beyond the hut short sections of the trail, especially on the longer option, are narrow and exposed. Fix chains bolted to the rock safeguard these segments of the path. There are also a few places where you may need to use your hands to negotiate short, steep descents. Both trails dropping down to Alp Languard are quite steep.

Pick a beautiful day so you can take your time and soak in the views on this scenic hike. Get an early start to avoid the clouds that typically move in as the day progresses and obscure the views.