near Grindelwald in The Bernese Oberland 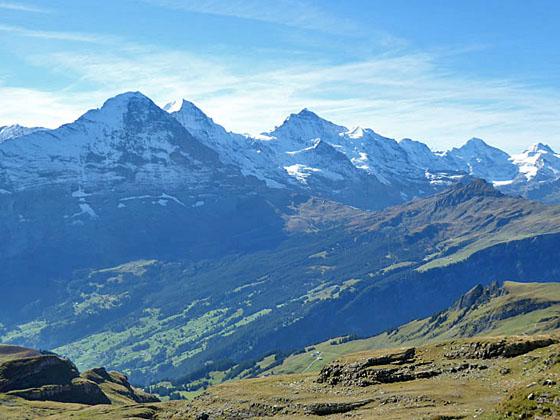 One of the best hikes in the Grindelwald area features fabulous views of the Bernese Alps stretching from the Wetterhorn, Eiger, Jungfrau and Breithorn, towering above the Grindelwald and Lauterbrunnen Valleys, to the Bluemlisalp massif in the southwest. 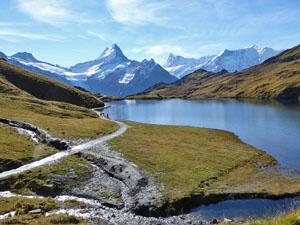 Distance from Trailhead: 1.9 miles (one way)

Take the Firstbahn gondola from Grindelwald (3,392-ft.) to First (7,110-ft.), situated atop a minor summit on the north side of the valley. (See directions below.) First features a popular restaurant with a sun terrace and a “Cliff Walk”, a cantilevered metal walkway bolted to the sheer west face of the First summit that leads to a 150-ft. long viewing platform with panoramic views of the 4,000-meter peaks towering above the south side of the valley. The walkway connects with the restaurant’s sun terrace where signs help you identify the peaks.

Dominating the stunning views from First are the Wetterhorn, Schreckhorn and the Eiger. Glaciers spill down the flanks of the massifs to the deep incised gorges. Views extend southwest to Kleine Scheidegg, the Jungfrau and, in the distance, the peaks rising above the Lauterbrunnen Valley.

Behind the restaurant and lift station find the trail signboard. Head northwest toward Bachalpsee (50-min), Faulhorn(2-hr 20-min) and Schynige Platte (5-hr) on a wide gravel track ascending through meadows on moderate grades. This section of the trail enjoys non-stop views from evolving perspectives. To the southeast the Obere Grindelwald glacier tumbles in motionless waves down the slopes of the Wetterhorn, Barglistock and Schreckhorn. To the south the Finsteraarhorn soars beyond the glacial cirque formed by the Fiescherhorn, Monch and Eiger. To the west Reeti rises above the bowl cradling the Bachsee (aka Bachalpsee), a popular lake.

After 0.7 miles the grade eases and the trail soon curves to the left (west) through lovely meadows toward the Bachsee. At 1.6 miles the path reaches a junction where a trail branches right toward the Hagelsee and Wildgarst. Stay on the main track to the Bachsee. A short distance beyond pass a second junction with a path heading left (south) toward Waldspitz, Bort and Grindelwald.

At 1.9 miles arrive at a trail junction at the southeastern end of the Bachsee (7,431-ft.). The lake is split in two by a natural dam, with the lower lake located 20-ft. below the upper lake. On a calm day the Schreckhorn is perfectly reflected in the lower-lake’s mirror-like surface. Views extend west across the upper lake to the Faulhorn, Esel and Simelihorn rising above the cirque at the head of the valley. The lake basin is a popular picnic spot and a favorite destination for parties looking for an easy hike. Get an early start to avoid the crowds. 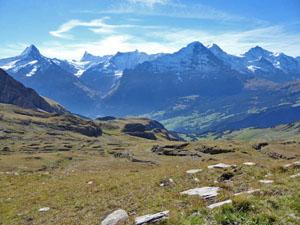 Distance from Trailhead: 3.8 miles (one way)

After exploring the area around the Bachsee, return to the junction at the southeast end of the lake. Ignore the trail heading left (southwest) to Spitzen, Feld and Bussalp. Our trail branches right (northwest), skirting the right (northeast) shore of the Bachsee toward Faulhorn (1-hr 30-min) and Schynige Platte (4-hr 15-min).

At the northwest end of the lake the trail curves to the left (west/northwest) and starts a steep ascent through rocky meadows toward a saddle. Switchbacks facilitate the climb. As you ascend turn around for beautiful views of the Wetterhorn and Schreckhorn forming the perfect backdrop for the Bachsee. To the east views open to the Schwarzhorn rising to the north of Grindelwald.

Reach the broad, grassy saddle at Gassenboden (8,373-ft.) at 3.1 miles. Here signs points to a path dropping left (southwest) toward Bussalp. Our trail curves to the right (north) and climbs the toward Faulhorn (25-min), Manndlenen (1-hr 10min) and Schynige Platte (3-hr 10-min). Panoramic views from the saddle encompass a sea of peaks to the southwest including the Jungfrau, Breithorn and, in the distance, the Bluemlisalp massif. The Faulhorn rises to the north.

Beyond the saddle the trail continues the steep climb, arriving at the Faulhorn junction (8,596-ft.) at 3.4 miles. Here a trail heads north, switchbacking up steep grassy slopes to the Berghaus Faulhorn and the summit of the Faulhorn (8,793-ft.). If time and energy permit, a detour to the summit is rewarded with grand views of the Bernese Alps to the south and the Lake Brienz to the north. Add 0.4 mile (round-trip) for the detour.

To continue the hike, turn left (west) at the junction toward Manndlenen (1-hr) and Schynige Platte (3-hr) on a narrow trail that initially drops steeply across the south facing flanks of the Faulhorn. At 3.6 miles the grade eases as the trail travels west along a ridge and then climbs a low grassy knoll. Near the top of the knoll watch for red/white blazed rocks marking a turn to the right at 3.8 miles. (There is no sign.) This is our trail. (A use-trail continues along the top of the knoll to excellent lunch spots with stunning views of the peaks towering above Grindelwald, Lauterbrunnen and beyond.) 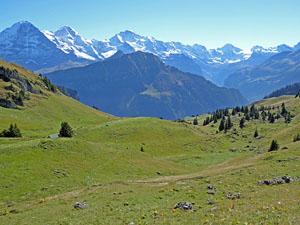 Distance from Trailhead: 10.2 miles (one way)

Turn right (northwest) and descend the blazed trail on a rocky path, following a jog in the ridge. Soon the trail and the ridge curve left (west). The path now descends near the top of the ridge crest to a junction at Pkt. Ignore the trail to the right (north), descending toward Faulegg, Battenalp and Iseltwald along the slopes to the south of Lake Brienz. Our trail curves left (southwest) and follows an undulating course along the south side of the ridge crest with terrific views of the Bernese Alps. These will be your last views of the peaks until you near Schynige Platte.

At 4.6 miles the path crosses to the north side of the ridge where views open to Lake Brienz. Follow the rocky trail as it heads west, descending on moderate grades toward Manndlenen, the location of a small hut and restaurant. Views now encompass the interesting rock formations along the flanks of the Indri-Sagissa, the highpoint on the ridge across the valley. Soon the grade steepens as it path drops down a rocky slope and then swings to the right (northeast), dropping down a very steep trail to Manndlenen (7,690-ft.) at 5.3 miles.

Beyond the restaurant the trail heads northeast, descending limestone ledges on moderate grades along the south face of the Sagissa ridge. Use care along this section of the trail.  Some of the rock is quite slick, especially when wet.

At 5.8 miles the trail curves to the left (west/southwest) around the end of the ridge. Below the trail to the north is the Saglistalsee, a small lake, at the foot of the long, narrow Sagistal Valley, a hanging valley nestled between the Roteflue and the Indri-Sagissa.

The path continues descending along the north facing flanks of the Indri-Sagissa, dropping down scree covered slopes and rocky meadows to the pretty pastures at the end of the Sagistal (Sagis Valley) at 6.8 miles. Here the trail descends steeply for a half mile, traveling through the austere karst landscape around the Guw area, and then climbs over a rock outcropping along the east facing flanks of the Loucherhorn.

Along the way views reopen to the Eiger, Monch, Jungfrau and Breithorn towering above the Lauterbrunnen Valley and the peaks lining the south side of the Sefinental valley. To the east are interesting rock formations along the ridges extending southwest from the Indri-Sagissa.

The undulating path now crosses an old rockslide and then curves around a ridge extending southeast from the Loucherhorn, weaving its way through rock outcroppings along the peak's south facing flanks. Soon the trail climbs to and crosses the Loucherhorn’s southwest ridge at 8.25 miles. From the ridge crest enjoy more great views of the Bernese Alps to the south.

After crossing the ridge the trail turns north, descending on easy grades along the west face of the Loucherhorn. Schynige Platte, our destination, is now in view. After a quarter mile the trail curves to the left (southwest) and drops to a junction at Loucheren (6,627-ft.) at 8.6 miles.

Past the junction the descent continue on moderately steep grades through pretty meadows toward Schynige Platte.  Short, narrow trails branch right off the main track and climb to the ridge crest where panoramic views open to Lake Brienz, Interlaken and Lake Thun to the north and west. A short detour is recommended to take in the views. Note: Hikers with the time and energy can follow the trails along the ridge crest, taking a longer, circuitous route to the train station at Schynige Platte.

Back on the main trail the grade soon eases as the path weaves its way through pastures, passing above the alp buildings of Oberberg. At 9.7 miles cross a dirt farm road and then climb steeply up a gravel track to Schynige Platte (6,453-ft.) at 10.2 miles.

A cog railway, built in 1893, ferries visitors from Wilderswil to this high overlook with sensational views of the Bernese Alps including the Wetterhorn, Schreckhorn, Finsteraarhorn, Eiger, Monch, Jungfrau and Breithorn. Facility includes a hotel, restaurant and network of nature trails wandering through a botanic garden with over 650 species of plants native to the Swiss Alps.

When you are done exploring the area take the 52 minute ride on the cog railway down to Wilderswil where connecting trains leave for Grindelwald, Lauterbrunnen and Interlaken.

Pick a day that promises clear skies and get an early start. The trail is long and quite strenuous, with lots of ups and downs. Hikers should be in good condition and well acclimated. Do not attempt this hike during bad or threatening weather. Most of this hike is along high, exposed slopes, not the place to be during a storm.

The trail can be hiked from either direction. My preference is to start at First, which is higher than Schynige Platte and closer to the Faulhorn, the high point on the hike. This way you get down from the high point earlier in the day, always a good idea when hiking in the mountains.

From the Grindelwald Bahnhof (train station) to the First Gondola: Walk east along Dorfstrasse, the main street, in Grindelwald for 0.4 miles. Turn left on an unnamed street across from the vehicle entrance for the Sunstar Hotel. There should be signs for the Firstbahn lift at the turn. (If you pass the Gasthof Steinbock with a pizzeria on the ground floor you have gone too far.) Walk up the street to the First lift station, just past the Pension Gydisdorf.

Note: At the Firstbahn station you can purchase a round-trip ticket that includes the gondola ride to First, a one-way ticket on the cog railway from Schynige Platte to Wilderswil and the train ticket from Wilderswil to Grindelwald. The combined tickets are a better deal than purchasing all the tickets separately. It also saves you from standing in line at Schynige Platte and Wilderswil to purchase tickets.

There is typically wait time between when the cog train arrives at Wilderswil and when the trains leave for Grindelwald and Lauterbrunnen. Across the street from the train station in Wilderswil is a Migros grocery store, a good place to get a cold drink or a snack while waiting for the connecting train.