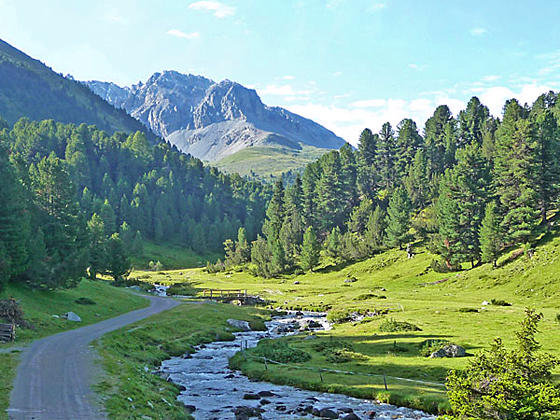 Piz Murtera to the south

Forested slopes, expansive meadows and the pretty Clemgia River, meandering down a scenic valley beneath rugged peaks and rounded mountains, are the hallmarks of this hike up the S-charl Valley to Fuorcla Funtana da S-charl, a broad pass overlooking the S-charl and Mustair Valleys. End the hike by descending into the Mustair Valley to Ofenpass (Pass dal Fuorn in Romansh).

This lovely walk up the S-charl Valley beside the Clemgia River leads to the vast meadows of Alp Astras. Here the trail ascends through alpine meadows to Fuorcla Funtana da S-charl with views of the S-charl and Mustair Valleys. End the hike by descend from the pass into the scenic Mustair Valley and then follow the Senda Val Mustair to Ofenpass (Pass dal Fuorn in Romansh).

The walk can be shortened by hiking to the turnoff for Alp Praditschol. The resulting 6.8 miles hike, rated as moderately-easy, is a good option for families or if the weather is taking a turn for the worse. You can also avoid the long return trip via bus and train from Ofenpass by simply turning around at Fuorcla Funtana da S-charl and tracing your steps to S-charl for an 11.4 mile round-trip hike.

You will be sharing the trail with bikes but the broad path up the valley facilitates multiple uses. At the end of the trip a bus and train ride returns hikers to Scuol.

Start the day with a bus ride from Scuol to S-charl. (See trailhead directions below.) Begin hiking southeast up a broad gravel/dirt track toward Funtana da S-charl and Susom Give. Susom Give is a hotel located at Ofenpass (Pass dal Fuorn in Romansh). Trail signposts at the bus stop will help get you started.

The track ascends on easy to moderate grades through meadows and forest up the beautiful S-charl valley along the north/northeast side of the Clemgia River. Behind you the rugged peaks towering above the north side of the Lower Engadine Valley form a lovely backdrop for the small hamlet. As you proceed up the valley views open southeast to the rounded, green slopes of Mot Falain and the rugged slopes of Piz Murtera.

Pass Plan d'Immez at 1.6 miles. A short distance beyond ignore the trail branching left to Alp Plazer. The board track now curves to the right (south) and crosses a bridge over the stream draining the Plazer Valley at 1.8 miles.

Reach a junction at 2.3 miles with a trail branching left toward Tamangur Dadora and Dadaint. We stay on the trail to Susom Give that crosses to the west side of the Clemgia River on a bridge. This crossing is a good turn around point for families looking for an easy hike.

The track now curves to the right (southwest) and ascends through lovely meadows. To the southeast the cirque anchored by Piz Murtera and the Lorenziberg dominate the view. Below the track the river meanders through emerald green meadows along the valley floor. As you ascend, turnaround for nice views of Piz Plazer and Piz Sesvenna towering above the Plazer Valley to the northeast.

At 3.4 miles pass a track branching right to Alp Praditschol. Ahead views open of the ridge extending east from Piz Vallatscha and the barren, rounded summit of Mot Radond. Alp Astras is now in view. This junction is another possible turnaround point for parties looking for an easy day.

Beyond Alp Praditschol the grade abates and the trail now traverses through meadows to Alp Astras and a trail junction at 4.25 miles. Here a path branches left, heading back toward Tamangur Dadora and S-charl. We bear right (south) on the trail that goes behind the alp to a second junction where we turn right (southwest) toward Funtana da S-charl and Susom Give. The trail to the left leads to the Costainas Pass.

The trail now climbs steeply through meadows with great views of Piz Vallatscha and Piz d’Astras to the west/northwest. Piz Murtera rises above the east side of the S-charl valley while Piz Plazer and Piz Sesvenna dominate the view to the northeast.

At 4.7 miles the grade abates as the trail traverses through the Plan Mattun. A half mile beyond the ascent resumes, now on moderate grades, to Fuorcla Funtana da S-charl (7,848-ft.) at 5.7 miles. In Romansh this translates into the S-charl Spring Pass. Here a sign points south to Alp da Munt and Pass dal Fuorn (the Romansh form of Ofenpass).

At 5.9 miles the trail begins descending from the pass, reaching a junction at 6.0 miles. We bear right on the trail to Pass dal Fuorn (Ofenpass). (The trail to the left leads to Alp da Munt and Tschierv.) The boot beaten path now drops steeply down the hillside. Soon the path becomes clearer and views open to the Plaun da l'Aua.

At 6.6 miles the grade abates as the trail curves to the west, traveling through meadows with scattered trees to a junction with the Senda Val Mustair at 6.9 miles. We turn right (west) here toward Pass dal Fuorn.

The Senda Val Mustair, a wide gravel track, now descends on easy to moderate grades through the Plaun da l’Aua to a junction at 7.4 miles.  Here we bear right toward the Pass Dal Fuorn (Ofenpass). In a short distance the trail enters the trees and traverses above the highway before dropping down to the Pass dal Fuorn (Ofenpass) and the Hotel Susom Give at 8.4 miles.

From Scuol to S-charl: From the train station in Scuol, take the #913 bus headed toward S-charl and get off at the last stop in S-charl. The bus makes several stops in Scuol. Visit the SBB Website/SBB app to find the stop nearest your accommodations. The beautiful ride up the Val S-charl takes about 41 minutes.

If you are staying in another part of the valley, take the train or the postbus to Scuol and then catch the postbus to S-charl. Note: This is a very popular route. Get an early start and if possible purchase your tickets the night before the hike.

Ofenpass to Scuol: The bus stop at Ofenpass is located in the parking lot adjacent to the Hotel Susom Give. Take the #811 bus bound for Zernez, staziun (Zernez Train Station). Get off at the train station and catch a train bound for Scuol-Tarasp. The entire trip will take an hour and 23 minutes. At the Scuol train station you can either walk back to your accommodations or catch a local bus. Visit the SBB Website/SBB app to find the stop nearest your accommodations.