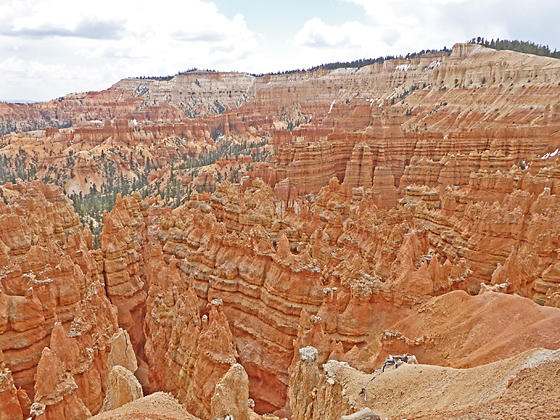 A walk along the Rim of Bryce Canyon offers unforgettable views of amphitheaters filled with multi-colored hoodoos, massive fins and eroded ridges. Along the way pass iconic formations such as the Wall of Windows, Silent City, Thors Hammer and Fairyland, to name a few.

The park’s shuttle bus serves all the trails major access point except Fairyland Point. It is easy to shorten the hike by walking the Rim in sections and then using the shuttle point to return to your vehicle. The most popular and crowded segment is between Sunset and Sunrise Point. The least crowded is the section between Bryce and Inspiration Points.

For the most part the broad, hard-packed trail travels along the rim except to circumvent obstacles or facilitate ascents/descents. There are steep drop-offs along the trail but the path is wide enough for most people to feel comfortable. If you have a fear of heights and sheer drop-offs you may probably to avoid the section between Bryce Point and Inspiration Point.

Segments of the Rim hike are incorporate into two the park’s loop hikes. You will walk from Sunrise point to Fairyland Point on the Fairyland Loop and between Sunset and Sunrise points on the Queens Garden – Navajo Loop. If you plan on doing both of these hikes then simply walk the Rim between Bryce Point and Sunset Point to see the remainder of the Rim.

From the north end of the parking area at Bryce Point, a broad trail heads north to the Bryce Point overlook (8,300-ft.). The viewpoint features sweeping, panoramic vistas of the northern section of Bryce National Park and is a favorite spot for sunrise photographers seeking to capture the first light of the day hitting the multihued hoodoos at the head of Bryce Canyon.

From the overlook the Rim trail heads southwest and then curves to the northwest, as it travels around the head of Peek-a-boo Canyon. At 0.8 mile the trail reaches the ridge topped by the Wall of Windows along the west side of the canyon. Turn around here for good views of Bryce Point and the Peek-a-boo trail descending into the canyon below Bryce Point.

The Rim trail now arcs above head of Bryce Canyon. At 1.1 miles an overlook along the trail offers great views of the west side of the Wall of Windows.

Beyond the overlook the trail descends on easy to moderate grades. Along the way is a short section of the path with steep drop-offs on both side illustrates the erosional forces still at work along the edge of the plateau.

At 1.7 miles reach Inspiration Point. The overlook consists of three levels offering spectacular perspective on the main Bryce Canyon amphitheater. Boat Mesa serves as the backdrop for Silent City, a labyrinth of hoodoos to the north. The ridge with the Wall of Windows and the Cathedral, separating Bryce Canyon from Peek-a-boo Canyon, dominates the views to the north and south. Look carefully and you will see a segment of the Peek-a-boo trail descending along the ridge. Bristlecone Point rises in the distance to the east.

Past Inspiration Point the trail heads north with terrific views of Silent City. Here we look down steep ravines, lines with massive fins topped with weird and wonderful hoodoos of all shapes and sizes. Balanced rocks and other fascinating formations jut from the walls along the rim.

At 2.1 miles the path curves to the northeast around Silent City to Sunset Point at 2.4 miles. The overlook boasts breathtaking views of Silent City, to the south) and Bryce Canyon’s main amphitheater. Take some time to walk a short distance along the Wall Street Trail to the closure. (The trail is impassable due to a landslide.) Here steep switchbacks drop down a narrow corridor lined with massive fins. Thor’s Hammer and the Three Gossips, two well-known formations, rise along the north side of the overlook.

After taking in the views, proceed north on the Rim Trail toward Sunrise Point at 2.9 miles. This scenic section of the Rim features terrific views of the Queens Garden amphitheater a well as Boat Mesa, to the north, and Bristlecone Point, to the east.

At Sunrise Point the stark pink cliffs of the Aquarius Plateau form the perfect backdrop for Boat Mesa and the Sinking Ship rock formation to the north. Closer-at-hand hoodoos and the rounded ridges of Campbell Canyon demand our attention. Bristlecone Point dominates the view to the east while the long multi-colored ridges extending from the plateau’s rim around Bryce Point tower above Bryce and Peek-a-boo Canyons to the southeast.

At 3.1 miles reach the junction with the Fairyland Loop trail descending into Campbell canyon. We continue heading north on the Rim Trail toward Fairy Point. The undulating trail now travels through scattered trees above the head of Campbell Canyon. Along the way enjoy nice views of hoodoos, spires and fins jutting from ledges and ridges along the canyon rim.

At 3.9 miles the trail briefly leaves the rim as it climbs a hill, reaching the high point (8,150-ft.) along this segment at 4.1 miles. Here the trail turns east and descends on moderate grades, echoing the rim’s contours as it twists around the head of Campbell Canyon.

At 4.7 miles the grade moderates as the trail curves to the left (north/northeast). Here views stretch south toward Bryce Point. The path now descends on easy grades through scattered trees. At 5.2 miles we lose the views as the trail climbs over a low ridge at the western end of Boat Mesa.

At 5.3 miles amazing views open to Fairyland, a colorful sea of hoodoos, spires and pinnacles in a canyon beneath Fairyland Point. A gentle descent along the rim soon leads to Fairyland Point and the end of the Rim trail at 5.5 miles. Here armies of hoodoos eroded into fantastical shapes, stand guard at the head of Fairyland Canyon. To the south are great views of Boat Mesa.

Please remember that the shuttle bus does NOT stop at Fairyland Point. You need to have a car positioned at the overlook or return 2.7 miles to Sunrise Point for an 8.2 miles hike.

Alternatively, take the Park Shuttle Bus to the Bryce Point stop (stop 3). The buses run every 10-15 minutes from April to October. The shuttle bus parking lot is located along UT 63, a short distance past Ruby’s Inn (in the hotel area). Limited parking is also available at the Bryce Visitor Center (stop 1), located 2.4 miles from the parking area.