near Saas Fee in Valais

This challenging hike travels up the beautiful Ofen Valley to the Jazzilucke, the high point of the hike, with panoramic views of the peaks surrounding the Mattmark Dam and extended views of the Monte Rosa massif. A narrow, exposed trail then travels along ledges clinging to the sheer east face of the Jazzihorn before climbing rocky slopes to the peak’s eastern ridge.

The trail then descending along the ridge crest to Antrona Pass, located on the saddle on the ridge between the Jazzihorn and Latelhorn. Antrona Pass, once an important medieval trade route, is a wild and remote spot with views extending down the Furgg Valley in Switzerland and east to the high peaks along the south side of the Troncone Valley in Italy.

Beyond the pass the trail travels on a high route traversing the Furggtal’s steep northeastern slopes, rising and falling to circumvent landslides and ridges. Along the way enjoy extended views of the 4,000-meter peaks rising above Saas Fee. The trail ends at Heidbodme, a scenic belvedere with panoramic views of the peaks rising along the west side of the Saastal.

This trail is recommended for experienced hikers with a good head for heights. The trail is quite exposed along the section running from Jazzilucke to Antrona Pass and should not be taken during bad weather or if the weather is taking a turn for the worse. The trail should also be avoided if covered by ice or slick snow.

I strongly recommend getting an early start for this hike. Warm air rising from the Troncone Valley in Italy often causes mist/clouds to form along the east face of the Jazzihorn and around the Antrona pass by mid-day, enveloping the exposed section of the trail and obscuring views into Italy.

Although this trail can be hiked in either direction, I recommend walking in a counter-clockwise direction to reach the Jazzilucke and the most challenging part of the hike earlier in the day. (See the trailhead directions for more information.)

Before starting the hike, be sure to check the times the last chairlifts down from Heidbodme and Furggstalden. It is a long and very steep walk down to Saas Almagell if you miss the last lift. 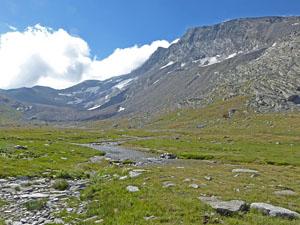 Distance from Trailhead: 4.8 miles (one way)

Note: This trail can be hiked in either direction. I recommend walking counter-clockwise from Mattmark to Antrona. This will allow you to get to Jatzilicku (alternative spelling – Jazzilicku) and the most challenging part of the hike earlier in the day. (See directions below for more information.)

From the bus stop at the Mattmark Dam, climb the trail to the top of the dam and then walk east on the paved road atop the dam. Along the way enjoy nice views of Monte Moro and the Rothorn rising above the head of the valley. The large expanse of ice visible to the southwest is the Schwarzberg Glacier.

Reach the end of the dam at 0.6 miles. Turn right (south) toward Jatzilicku (3h 10min), Antrona Pass (4h 10min), Heidbodme (6h 40min) and Saas Almagell (8h 10min) on a good gravel trail heading south along the east side of the reservoir.

At 1.2 miles reach a junction and turn left (southeast) toward Jatzilicku. The trail climbs steeply up tight switchbacks and then follows a steep ascending traverse through a rock slide. Beyond the slide the trail continues its steep climb through meadows, passing a waterfall in-route.

As you climb enjoy ever improving views of the peaks lining the Swiss-Italian border to the south. To the west/southwest the Schwarzberghorn, Strahlhorn and Fluchthorn along with the Schwarzberg Glacier dominate the view.

At 1.5 miles pass a trail branching to the right toward Dischtealp, located at the head of the dam. Continue straight ahead toward Jatzilicku.

The grade eases at 2.0 miles as the trail curves left (east/southeast) and enters the Ofental (Ofen Valley), a wide “U” shaped valley clad in pretty meadows. Turn around (northwest) to see great views of the Egginer, Allalinhorn, Taschhorn and the Dom, along with the Strahlhorn and the Fluchthorn to the west of the dam. These views will be with you almost all the way up the valley.

As you ascend the valley pass a second trail branching right toward Dischtealp at 2.3 miles. At 2.7 miles reach a marked junction at Ofutal (8,300-ft/2,530-meter). The trail to the right (south/southwest) leads to Monte Moro Pass on the Swiss-Italian border. Continue straight ahead toward Jatzilicku.

Beyond the junction the trail climbs steeply up a low rise, essentially a stair-step in the valley, and then continues ascending the valley on easy to moderate grades. At 3.3 miles start a very steep ascending traverse up the north side of the valley. The south face of the Stellihorn towers overhead. To the south are good views of the Spechhorn and the Ofental Glacier.

Reach a trail junction at 3.75 miles. The trail straight ahead leads to Ofental Pass, a small saddle on the ridge at the head of the Ofental Valley. Turn left (north) toward Jatzilicku and Antrona Pass. The trail now climbs steep switchbacks traveling northeast along the south face of the Jazzihorn. Red and white blazes on rocks keep you on track.

The rocky meadows soon give way to scree covered slopes and views open to the saddle to the right (east) of the Jazzihorn, this is our destination. The final climb is quite steep, zig-zagging up through boulders and loose rock to the top of the ridge, reaching Jatzilicku (10,108-ft/3,081-meters) on the Swiss-Italian border at 4.8 miles.

From Jatzilicku the Schwarzberghorn, Strahlhorn, Rimpfischhorn and the backside of the Monte Rosa massif dominate the view to the west/southwest. On the Italian (east) side of the pass, sheer rugged ridges drop to a deep valley. Across the valley are the peaks forming the southern wall of a large cirque fill the skyline. On a clear day views extend north toward the Latelhorn rising above Furggrtal Valley.

If the weather is looking bad I strongly advise turning around at this point and returning the Mattmark for a very satisfying 9.6 miles hike. If the weather is good and your party has the time and energy then I recommend continuing the hike to Antrona Pass. 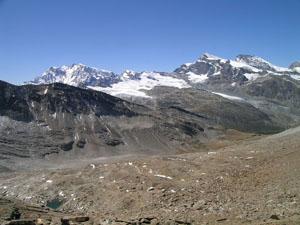 Distance from Trailhead: 5.5 miles (one way)

A sign at the pass points north to Antrona Pass (1h), Heidbodme (3h 30min) and Saas Almagell (5h). Note: The route between Jatzilicku and Antrona is not recommended for anyone with a fear of heights. It should never be attempted in bad weather or if the trail is covered by ice or snow.

To continue to Antrona Pass, follow the trail as it weaves through large boulders to the east side of the ridge. Here a narrow, exposed trail travels along ledges, clinging to the sheer east face of the Jazzihorn. Fixed ropes and fencing provide a level of security as you navigate the challenging trail. Soon the trail climbs a little and then crosses a rock field marked with blazes, arrows and metal posts. It is easy to get off track if you are not paying attention. At the end of the rock field the trail crosses a gully that is often covered in snow. A rope strung across the gully provides a handhold to facilitate the slippery traverse.

Beyond the gully the rocky trail ascends along a bench to the Jazzihorn’s east ridge. The low point on this ridge, extending between the Jazzihorn and the Latelhorn is Antrona Pass. At 5.1 miles the trail starts descending along the ridge crest to Antrona Pass, climbing down rocky slopes and around huge rocky slabs. Red and white markers along with metal posts mark the way.

At 5.5 miles the trail starts a descending traverse along a narrow, winding path on the east side of the ridge, going by old stone buildings without roofs just before reaching the pass. The pass was formerly used by mule trains going between Italy and Switzerland. The buildings are believed to be either stable or salt storage sheds.

Reach Antrona Pass (9,311-ft/2,838-meters) at 5.6 miles. The pass enjoys nice views of the peaks forming the ridge along the northeast side of the Furgg Valley and the Stellihorn to the southwest. To the southeast is Italy where more views extend to the peaks along the southern wall of the Troncone Valley. Looking down you will see the Lago del Cingino (Lake Cingino). 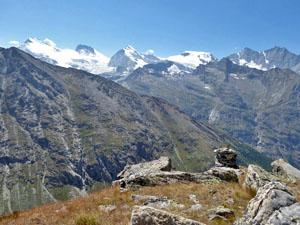 Distance from Trailhead: 10.8 miles (one way)

After taking a break, take the trail dropping down the west side of the pass toward Furggstalden and Heidbodme. At 5.8 miles reach at large boulder with an arrow point left toward Furggu (Furggstalden) and right toward Heidbodme. The trail from Antrona to Furggstalden drops to the valley floor and then descends through pretty meadows, losing over 3,000-ft in 5.2 miles. See the Antrona Pass trail description for more information.

The new trail from Antrona to Heidbodme travels along the valley’s northwest wall, rising and falling to circumvent ridges and landslides. Over the 5.2 miles the trail loses a little over 2,000-ft. and climbs about 500-ft. At Heidbodme there is a chair lift that descends to the Furggstalden area where you catch a second chair lift to Saas Almagell.

If you are tired and/or pressed for time the route to Furggstalden is the best bet. If you have the time and energy then select the trail to Heidbodme, which has the best views but involves some climbs making it more strenuous. For more information see the Antrona Pass via Furggstalden and Antrona Pass via Heidbodme hikes. The mileage and elevation profile for this hike assumes you return via Heidbodme.

Return directions from Fugrgstalden (Saas Almagell) to Saas Fee: Take the Furggstalden lift down to Saas Amagell and then follow the signs to the pos bus stop. Get on a bus bound for either Saas Fee or Saas Grund. If you are on a Saas Grund bus, change at Saas Grund for a bus going to Saas Free. (During busy times in the summer extra buses are run that do not follow the typical routes. Always check the front of the bus to see its ultimate destination.) For more information on the chairlift see the Saas Fee Lift Schedule and look at the section labeled Saas-Almagell.

Return directions from Heidbodme (Saas Almagell) to Saas Fee: At Heidbodme, purchase a ticket for the two stage lift to Saas Almagell. Take the Heidbodme Sesselbahn (chair lift) and then walk north, following the signs to the Furggstalden Sesselbahn (chair left) in Furgstalden. The walk is a little over a quarter mile. Take the Furggstalden lift down to Saas Amagell and then follow the signs to the postbus stop. Get on a bus bound for either Saas Fee or Saas Grund. If you are on a Saas Grund bus, change at Saas Grund for a bus going to Saas Free. (During busy times in the summer extra buses are run that do not follow the typical routes. Always check the front of the bus to see its ultimate destination.) For more information on the lifts see the Saas Fee Lift Schedule and look at the section labeled Saas-Almagell.

Starting at Mattmark versus Saas Almagell: I recommend walking counter-clockwise from Mattmark to Antrona. This will allow you to get an earlier start and get over Jatzilicku and the most challenging part of the hike earlier in the day. The first postbus to the dam arrives at 8:24am. The chairlifts from Saas Almagell to Furggstalden and Heidbodme don’t start until 9am and there is a quarter mile walk between the two lifts so you will probably not start walking from Heidbodme before 9:30am.